Now that everything’s growing like crazy, it’s nearly time for flexible garden waste bins to be placed around the Point so you can weed, trim and prune and get rid of all the clippings.

Back in early winter we put out 14 bins, mostly in older streets where planting has become lush enough to need a trim. Here’s the location map we distributed last time. Bins were dropped where you see red stars marked on the map – and a few of those places were so popular they needed two or three bins. 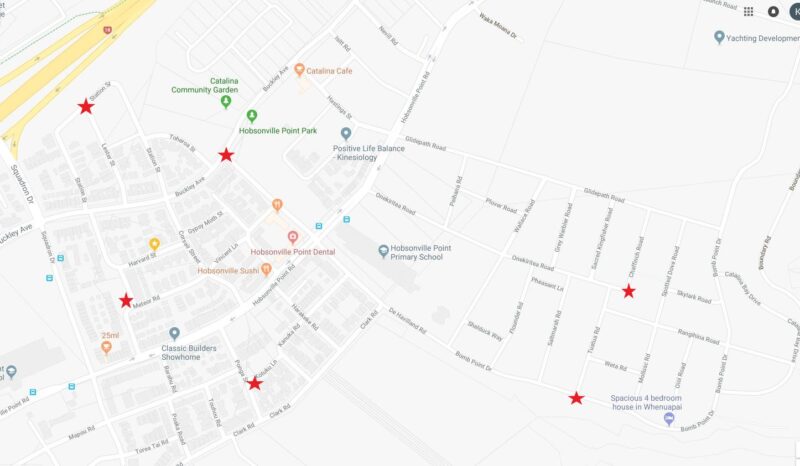 Please check out the map. If we did not put a bin near your place last time, and you think you and your neighbours could fill one, please email hobsonvillepoint@crockers.co.nz to provide your suggested location and put BIN LOCATIONS in the subject line. We may be able to rejig distribution by spreading the bins around.

NB The bins are for GARDEN WASTE ONLY, not ordinary household rubbish.

By the way, we know many of you are keen for the Society to spread the good Berms, Beers & Barbecue idea (as run by Sunderland A residents) all over the Point.

We haven’t had time to organise that but you can do it yourself. If  you share a laneway, street or terrace block – why not get your neighbours together that weekend around someone’s barbecue and make it a social event.

Fill a flexibin during the day and, as the sun sinks, cook up something tasty for the kids, share drinks and snacks with your neighbours and reward yourselves for making your street look great!

Obviously, yank out unsightly weeds!. There are thistles and prickly things springing up everywhere – and if you’re living anywhere near a phoenix palm you need to watch out for new spiky seedlings.  They’re easy to dig out when they’re small but very hard to deal with as they get bigger.

But even ornamental plants need attention. Beds of pretty dietes lilies have been putting on a great show this spring around Hobsonville Point but their white and purple flowers are now dying off.  If you have them in your garden or in front of your fenceline, here’s how to have them look just as good next season…

Once the flowers have turned brown, those stalks need deadheading. If you don’t trim them back, the plants will drop seeds and soon you’ll have ever-growing numbers of unruly clumps full of shabby brown stalks.

There are many areas planted with hebe’ as well.  Most are New Zealand natives and are pretty hardy but they also benefit from some TLC after their pink flowers have died away. Trimming them back ensures good flowering next spring and also stops them becoming too leggy, which makes them susceptible to a sucking insect called scale.

Now the weather’s warming up (finally!) it’s a good idea to attend to those small tasks and chuck the clippings in the garden waste bins. Date reminder: the weekend of Oct 27-28.

This time around, they’ll be Green Gorilla flexibins.

Let’s Talk About the Future