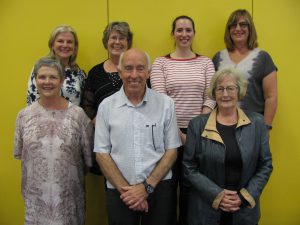 The 2017 HPRS committee features some new faces led by old hands, following the appointment of the chairperson and vice chairperson at the first meeting in December.

Peter Herbert remains the chairperson for the coming year supported by Joan Vujcich as vice chairperson, in a continuation of the leadership team which led the committee in 2016. The committee also welcomes fresh faces Shameem Chalcroft, Sue Heggie and Leanne Silver alongside returning members Raewyn Gilmour and Yvonne Bull.

Peter, an engineer, moved to Hobsonville Point about four years ago and has been on the HPRS committee since its inception. This is his third full term as chair. His vision is for HPRS to help create the most liveable community in the country.

Meanwhile Joan is connected to Hobsonville Point through her role selling the Waterford on Hobsonville Point Retirement Village opposite Catalina Café. She believes that Hobsonville Point is a showcase for community living and is eager to ensure that the high standards which have been delivered to date are maintained.

Information about the HPRS committee can be found here.