Te Kanohi o Te Manu (The Eye of the Bird) is a corten steel pied shag commissioned for the park by Hobsonville Point Development and Panuku Development Auckland with Auckland Council funding. Once complete, it will become both a playground and the ninth stop along Hobsonville Point’s Art Trail. 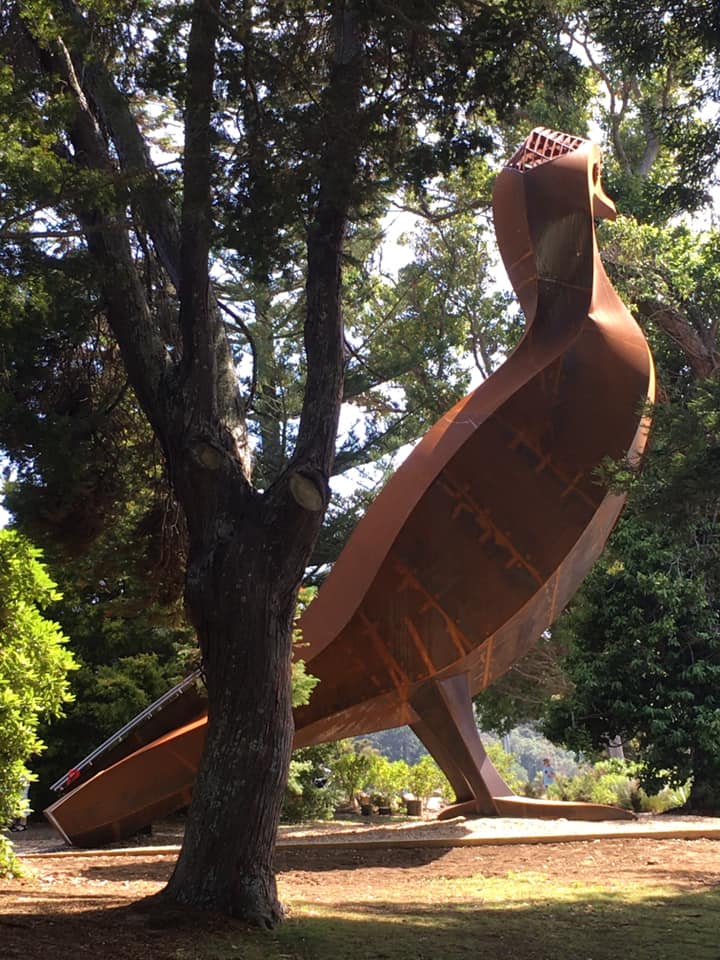 A large slide makes up the body and tail of Te Kanohi o Te Manu, inviting children to explore and interact with the piece. It also functions as a viewing tower where people can scale the steps to experience a bird’s-eye view from Harrier Point Park over the Waitematā Harbour.

It was inspired by the native pied shag that inhabits coastal areas of Hobsonville Point, as well as the giant “metal birds” (planes) that used to occupy the site, which was formerly a Royal New Zealand Air Force base. Made from corten steel, the bird will develop a rust-like appearance over time, a natural weathering process that would complement its environment.

“When we first began to develop the land at Hobsonville Point, we felt it was important to recognise the roles that public art and spaces to play have in forming the kind of place people want to live in and visit,” Hobsonville Point Project Director Caroline McDowall says. “Te Kanohi o Te Manu is an artistic statement, an engaging playground, and speaks to the unique character and heritage of Hobsonville Point,” she adds.

Te Kanohi o Te Manu has been a long-awaited addition to the neighbourhood, with initial plans commencing in 2016. Its complicated design and scale pushed the boundaries of engineering and consent requirements and resulted in unforeseen delays, but the wait has been worth it, Upper Harbour Local Board Chair Margaret Miles says. “This unique sculpture will provide a wonderful opportunity for residents of all ages to explore and enjoy. For children the slide will be a big hit and for others the tower will provide an opportunity to view the surrounding landscape, witnessing the transformation of the area from a significant part of the Royal New Zealand Airforce base to a vibrant residential area.”

Panuku General Manager of Development Allan Young says: “We’re delighted to welcome Te Kanohi o Te Manu to Hobsonville Point, where she will become both a significant landmark and a steward for the neighbourhood, overlooking the water and inviting people to explore the area and the structure itself.”

Phillip Meier’s work will be familiar to residents and visitors to Hobsonville Point; he was also responsible for the ‘forest floor’ playground at Hobsonville Point Park, featuring giant corten berries, seedpods, and nests.

Te Kanohi o Te Manu is now undergoing final installation and assembly to ensure it meets all safety requirements, and will remain closed to the public while the process is underway. Look out for updates on the Hobsonville Point Facebook page to find out when the sculpture will be open for public access.