We wish we could announce opening dates for Chichester Cottage and the Sunderland Lounge – and the reopening of the HQ building – but no official word has come through. All still await fixing, finishing or the delivery of Code of Compliance, and until work is completed none of our three long-awaited community venues can open their doors.

It’s very frustrating as we know people are bursting to set up great local events and activities and it’s hard to find rentable spaces close by. 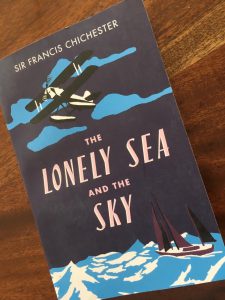 However, a Friends of the Cottage sub-committee has been formed to prepare that historic little house for use. As they begin to furnish it they’ve purchased a copy of Sir Francis Chichester’s book, The Lonely Sea and the Sky. Its pages include detail about his epic 1931 flight from Hobsonville to Sydney, via Lord Howe Island, in a tiny Gypsy Moth biplane. RNZAF engineers here helped him attach floats and install bigger fuel tanks.

Chichester stayed in the cottage as he planned his trip, and people who are mentioned in his story inspired two local street names – Isitt and Sidney Wallingford.

At 4am on the day he took off, the wife of Hobsonville commander Len Isitt, “the hospitable Mrs Isitt”, cooked him a hearty breakfast of bacon and eggs by candlelight. Isitt’s second-in-command, Sid Wallingford, worked at helping Chichester fix a compass error as he sat ready in his plane on the concrete pad by the water – right in front of the old hangar now occupied by Little Creatures. Francis survived, of course, and much later, in 1967, became the first person to sail the world solo, from west to east, via the great capes. His book cover, framed, will feature on one of the cottage’s walls.

Community Cottage Being Readied for Use