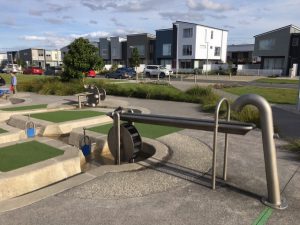 Last year some parents approached the committee asking for some shade to be provided for the play area at the waterpark on Onekiritea Road. They had sought quotes for two different types of shade protection over the concrete, which does get fiercely hot on sunny days. With every school and daycare centre providing shade over outdoor areas where young children play, we agreed it was a wise move and allocated funds in this year’s budget. When we called a meeting about it late last year and canvassed residents who live around the park, we received good support for cantilevered umbrellas but decided not to proceed when we heard that such styles can be problematic on windy days.

So we were back to square one.

We are now investigating shade sails and will consider that at our first meeting of the year on Feb 13. Note that any such additions can only proceed with permission from the park’s owner, Auckland Council, and we will also ask once more for the views of people living around the park.

Shade often comes up as an issue in the Point. But what we all need to remember is that this was previously a treeless air field. A key part of the development has been the re-establishment of native trees in parks and reserves, and planting of street trees. They take time to grow, however, so it will be a few years before we all have the benefit of the shade they will eventually provide.

It’s the Season of Change!