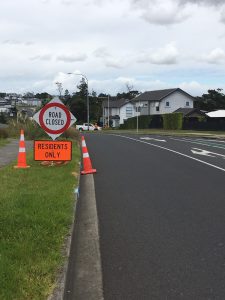 If you’ve tried since Tuesday to drive along the top part of Buckley between the Squadron Drive corner and the Countdown shopping zone, you’ll have found the road closed. It’ll be that way for some weeks as Auckland Transport fixes its lumpy, bumpy surface.

One of our residents who has been pestering AT for some time about the state of the road, has shared on Facebook an email he received from AT’s Road Corridor Delivery Team:

“We have had ongoing issues on Buckley Avenue which was largely caused by heavy vehicles involved in new developments around the area.

“Most of the development on Buckley Ave has now been completed and we have done a last round of temporary repairs before we start the rehabilitation and re-seal of this road in mid-January.

“The rehabilitation and re-seal of Buckley will start on the 14th of January and will take between six and eight weeks to complete. Buckley Avenue will then be on par with all the other new roads in this area.”

A Message from Massey Police