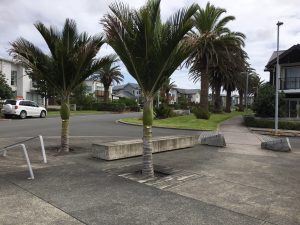 Recent hot weather, with conditions ranging from extremely dry to very wet, has been hard on some of our outdoor zones.

You may have noted dead trees in the big planter boxes on Launch Road approaching  the wharf area. The road is shared between HLC and the council, and the trees weren’t watered when they should have been. Some of them have survived however, and the dead ones are to be replaced with species more tolerant of tough conditions.

Shaggy grass on the extra-wide berms on Buckley Avenue drew recent complaint, especially as it’s a key access route between the Point and the Upper Harbour Motorway. We were also aware of concerns relating to other streets.  Some Buckley residents organised their own trimming even as they wondered, ‘isn’t the council supposed to do this?’

While Auckland Council’s Parks Department handles maintenance of the large public park adjacent to Catalina Café, plus the area stretching between the playground on the corner to Hobsonville Point Road (next to The Brickworks), plus some other pocket parks, AT (Auckland Transport) has been mowing the wide berms on Buckley.

By the way, AT does not mow on a time schedule but according to need. It does no monitoring of its own. Instead, it responds to complaints or requests from members of the public. Calling the Council will put the job on their to-do list.

You’re probably aware that all Auckland residents are expected to keep their own berms tidy but Buckley’s broad swathes have been a special case as it is AT policy to handle central reservations on major arterial roads or where berms cut across more than one house. Buckley has apparently met those requirements in the past but in January AT and Parks were debating whose responsibility this chunk of land is.

Meanwhile the grass kept on growing and the committee hired a private contractor to keep the area looking neat short-term while we work out a long-term approach.

We need to have an ongoing plan for maintaining all shared spaces because as more of the Point is completed, HLC will hand more sections of streetscape over to the Council to look after. HLC is currently maintaining the bulk of public spaces, with only a small portion of Hobsonville Point being covered by Council departments.

This map shows the area (coloured orange) handed over to AC so far – a relatively small corner of the Point. Roughly speaking, it’s from Station Road across to Hobsonville Point Road, and from Squadron Drive to De Havilland. Meanwhile we are all paying our levies and the committee feels most members will be happy for us to use some of those funds to keep things looking spruce and neat. An opposing opinion says we are also paying rates to council and so deserve to get good service from that quarter. However, with every suburb across Auckland also clamouring for better mowing and trimming, it’s unlikely that Council will tend to the Point in future as well as HLC has been doing – or as well as we’d like it to be done.

Grass and gardens are two key topics we want to get your views on at our April community meeting.

Apart from grass berms, there are other planted and bark-covered pockets and corners that no-one seems to be taking care of.

Also, a few residents seem unaware that it’s their responsibility to weed and tidy plants in raised boxes or small gardens between their own front and side walls and the street.  We keep our neighbours happy if we pluck out weeds when they’re still small – and when they’re still easy to dispose of.

Our AGM is coming up fast