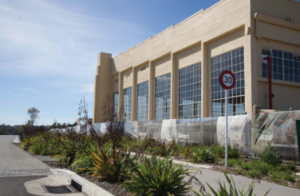 The future of the large yellow heritage hangar owned by Auckland council at the top of Launch Road in Hobsonville Point is in doubt.

The Hobsonville Point Residents Society Committee has been advised by Auckland Councillor Wayne Walker that work on restoring the Wasp hangar has ceased.  Plans had also been made to create a neighbourhood reserve for Wasp Square, a recreational space next to the Wasp hangar. Panuku is in negotiation with Kainga Ora to sell the whole 6 hectare block of council owned land that includes the Wasp Hangar and proposed Wasp Hangar reserve.

The vintage Wasp Hangar building was once used to house RNZAF’s Wasp helicopter fleet and has character building protection under the Auckland Council Unitary Plan. Hobsonville Point residents have long understood the Wasp Hangar, and Wasp Square would be put to good use as an asset for our community.

Early in 2020, a council representative told members of the HPRS committee that it was likely the Wasp Hangar would be converted for indoor recreation space, which could include basketball courts. This was great news, as we need more recreation facilities. But then we heard no more. And as months went by it became clear that due to Covid-19, there was a shortfall of financing for many council projects.

There is now no funding available for seismic strengthening of the building (estimated cost: $3.9 million), or for converting it for community use.

Discussions on its future have been going on between the Upper Harbour Local Board (who have budgeted $500,000 for the fit out), Auckland Council’s planning committee, and Panuku– a council-controlled but separate development organisation.

Panuku has been delegated authority by Auckland Council to sell the 6 hectares of land that include the Wasp Hangar, the proposed Wasp Square, and Airfields housing area, all of which were stated in the Masterplan for the area. The Masterplan specifically sets out the use of the Wasp Hangar as a community recreation facility with an adjacent Wasp Square neighborhood reserve. Once refurbished, the Wasp Hangar was to be handed back to Council.

Panuku has agreed to retain the Wasp Hangar although we don’t know what for or who they could sell it to, which is concerning.

Kainga Ora has the expertise and working capital to complete the refurbishment of the Wasp Hangar and development of Wasp Square, which they could then hand over to council. The community would benefit from their ongoing commitment to Hobsonville Point.

Residents have not been consulted and we believe it’s time for all of us to stand up and declare that:

2) Kainga Ora to finish the refurbishment of the Wasp hangar and put to good community recreational use under council ownership.

3) The inclusion of Wasp Square to include open space, parkland, and tree planting to break up and enhance what will otherwise become an even larger tract of closely packed housing.

4) Attention to be given to keeping as much history of the old military base as possible.

LInk 3 is a video of Councillor Wayne Walker speaking to the Council’s planning committee on April 1.

Roll up, roll up!